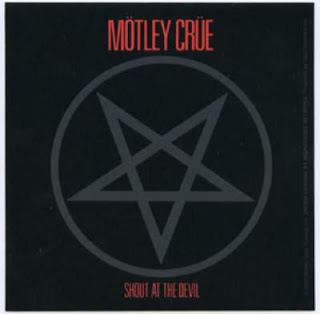 You know what? For now, I'm saying to hell with all recent music and stepping back into the eighties, which is hands down my favorite era for metal and hard rock. Metal was just shedding the newbie status it worked so hard to escape throughout the seventies, and the genre began to split off into numerous subcultures now outlined as thrash, speed, and power (among others). Even the underpinnings of death metal surfaced, though they would not fully emerge until the mid and later parts of the decade. Mötley Crüe found themselves right smack dab in the middle of the mess, releasing their first record entitled Too Fast for Love in 1981, followed by the ever classic Shout at the Devil in 1983. The band arguably jump started the entire glam metal fad, although I'm a firm believer that the subgenre is a random mishmash tag based on appearance, rather than a legitimate style of music. But I digress.

Shout at the Devil is essentially a conglomeration of enjoyable styles: most of the tracks dabble in the stereotypical heavy metal and hard rock, but "Red Hot" stands out, thanks to Tommy Lee's speed metal-esque drumming. Likewise, many, if not all, of the songs shine with an AOR-like quality, despite being fronted by a pentagram, and the whole ordeal reminds me of W.A.S.P.; although the Crüe would never reach the same level of straight profanity detested by the PMRC.

On the other hand, my biggest gripe with the album is the title track. From the beginning, the song has often been heralded as a metal classic, but I can find little, if any, metal riffing in the composition. Instead, "Shout at the Devil" points toward hard rock with simplistic chords and ends up sounding nothing like Iron Maiden or Judas Priest like I hoped for. "Looks that Kill," "Too Young to Fall in Love," and "Ten Seconds to Love," are also well-known, but unlike the title track, they don't try to mask what they are under a cleverly-placed cloak. For Mötley Crüe, this is undoubtedly where they shine most; where the tracks are original, and not a watered-down rendition of something bigger.

In the end, what listeners have is Mötley Crüe and glammy stylings at their respective peaks. Shout at the Devil is an excellent listen on its own, but when one considers the impact the album had on the hard rock and metal, the experience quickly rockets to "essential." If you don't own this record, you wouldn't be doing yourself any favors by not picking it up. When I wrote the record was essential, I sincerely meant it. It's a must-buy, methinks.