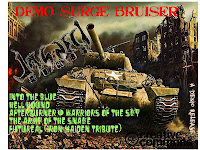 Jagged Surge hail from India with a theoretically enticing blend of hard rock and metal that harkens back to the eighties. The band borrow heavily from their idols, mixing bluesy passages with harder hitting sections, which remind of something not so far removed from Tesla meets Megadeth. Interestingly enough, the only track that sounds like it has a real drummer is "Hell Hound" that, in comparison to the others, seems crisper and more alive. The remaining songs sound rather sterile and amateurish, in comparison, lacking the power needed to propel the band past their local status.

The majority of the Demo Surge Bruiser attempts a testosterone-filled run through World War II. Taking a closer look at the cover reveals the band's obsession with war-themed pieces, which is rather cliché for a metal band itself, but refreshing for group from India to pick as subject matter. A proper mixing and mastering would benefit the band greatly because their music lacks oomph, sounding terribly messy and unclean; that, along with improved musicianship, are the band's biggest problems, but it isn't enough to justify avoiding this demo because "Hell Hound" is a gem.

Luckily, the band appears to have a very solid fanbase at home, and as long as they can tighten up their playing a little bit, we may have a winner on our hands. The recent line-up changes may prove to be beneficial for Jagged Surge, so listeners can surely remain on the edges of their seats as to how the band might progress. But, for now, all fans can do is sit and wait.

The Verdict: Recommended only if you want to dig into the depths of the Indian metal scene.