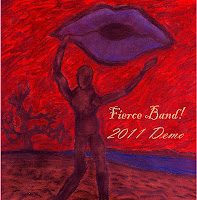 Fierce Band!'s material has escaped review for too long, not because I was avoiding their work, but because I didn't know how to approach it. They combine the best elements of progressive, death, and heavy metal, making their sound quite varied, albeit with a few outright surprises. Their instrumental skill is awe-inspiring, making me I wonder if I should give up playing my own guitar. But the thing is, I still don't know what's coming through my speakers because Fierce Band! are familiar, yet unlike anything I've ever heard before. Maybe it's the production, maybe it's the way their music is arranged, or maybe it's a sort of weird aura. Whatever it is, I'm digging it.

Fierce Band! come from the jolly state of Texas--Denton to be exact--which explains why I can't figure them out. Jokes aside, I'll lay down what I dislike about their music before mentioning the positives. So, sit your ass down, pull up the band's Bandcamp page, and give 'em a listen (and snag their tunes for free). 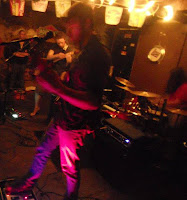 With that being said, the tidbit I find annoying are not song lengths or technicality. In fact, I welcome those. For a band with weird time signatures and instrumental talent, they're excellent at composing a piece of music, which is a rarity among the wanky progressivism popular these days.

However, all it takes is one small change to bring a composition down. Fierce Band!'s decision to clutter songs with clips from movies detracts from what matters most: the music. Forcing myself to ignore these random cheesy add-ons, I've been able to enjoy the majority of their material, but it may not be as easy for others. Clearly the band love media, but I can't understand their choice to include the clips without lyrics in front of me.

What I like about their music is literally everything else: the emotional guitar playing, creative melody bits, high-in-the-mix bass, and scratchy harsh/soaring clean vocals. At the moment, my favorite track is one of the shortest, "Blue Liquid Lips pt 3," because it sums up everything that makes Fierce Band!, well, Fierce Band!. The song is part of the "Blue Liquid Lips" quintet, which showcases the band's technical skill through a series of movements. In other words, one big composition cut into smaller pieces for those short of attention.

The band currently have four releases, including a single, two demos, and an EP. Mind you, their music is not easy listening due to song lengths, but you will be rewarded for your time as long as you ignore the cheesy clips. For now, I'm still trying to dissect what I've been listening to, but I suppose I'll keep coming back to Fierce Band! in an effort to understand their music. Well, and when they slap a new record on the table.