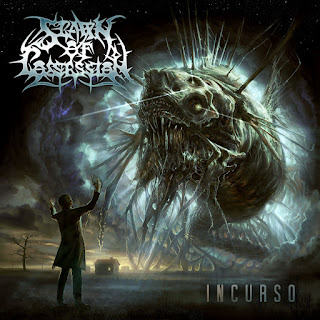 Hitting the proverbial nail on the head, Spawn of Possession return with their third full-length feeling renewed and refreshed. Since their first two records, the band’s lineup has shifted significantly, but for the better--Incurso is the most addictive culling of spiraling riffing and chaotic song writing since Gorod stepped up to the metal plate with Process of a New Decline in 2009.

The band takes seemingly unapproachable technicality and transforms it into something appealing for even the fussiest of metalheads. Technical death metal has only recently been in great commodity, and with the spur in popularity comes a flood of groups lacking writing finesse. Nonetheless, Spawn of Possession has good qualities; particularly ease of access, and Incurso remains one of the better releases for the subgenre, thanks to memorable and proficient compositions.

For the most part, Incurso serves as a catalyst for the band to channel their inner creativity. Fusion-like bass playing underpins Spawn of Possession’s sound, and guitars follow with rising and falling alternate picking fashioned with brain-twisting precision. Vocals are typical death metal fare, albeit layered numerous times. High-pitched shrieks loom over growls like Godzilla’s shadow over Tokyo--both working hand-in-hand with one another--but, when separated, become a different beast all together. Spawn of Possession occasionally slow down to observe the finer things in life, like spacious, clean guitar tones and ominous organ-lead passages, but the bulk of Incurso refuses to let up and stays planted in a frenzied blender. 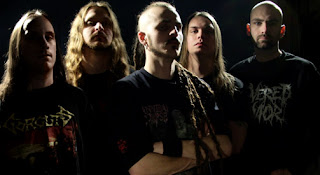 Even as Spawn of Possession prefer to keep their songs crazy, they still dip into conventional metal territory, similar to how a “normal” death metal band might tackle an arrangement of music. “Deus Avertat,” for instance, rips along at breakneck speed on the guitar’s lower strings and transitions in and out between tremolo picking and higher-placed leads, while others, like “Servitude of Souls,” are in much in the same vein. The last two, including the limited edition’s bonus track, begin with grim classically-influenced keyboards that set the mood and provide a nice alternative to other material on the record. The rest of the album’s track listing carries an archetypical technical death metal sound, but retains the band’s distinctive character. Highlights and personal favorites include “Where Angels Go Demons Flow,” “Bodiless Sleeper,” “Deus Avertat,” and “Apparition.”

With Incurso, Spawn of Possession have expertly crafted a technical death metal masterpiece, primarily attributed to songwriting and raw instrumental talent. While not everyone will be able to delve into the band’s music, the record should prove to be an excellent starting point for those looking to explore the sub-genre and as a reach into an enticing 10 tracks of metal. Already the band has been placed onto several developing best of 2012 lists--the praise is undoubtedly deserved, too, because listeners will continue to see great things from this group.