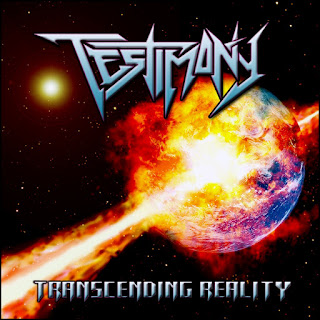 Home-grown Indiana thrashers Testimony combine elements of thrash and progressive metal, yielding a sort of spacey travel that rips like any other band from eighties. The band's first release, Transcending Reality, borrows heavily from what came over 20 years ago, but places a lengthy twist on the music, often with drawn-out sections and technical frills. I can't help but be reminded of Pestilence's material when I give Testimony a spin because of the jazzy, fusion-like sections that dip into other musical genres.

Surprisingly, Testimony are a rookie band, and while that may not cross your mind upon first listen, the real hint is in the production which is like a step back to thrash metal's heyday. Although Testimony don't quite fall into the trap, they feel like a second-tier band in terms of songwriting and their ability to create a memorably hook. Melody is decent enough that you might be able to find something to enjoy, but a sense of direction is missing that is absolutely essential to reel in an audience. As far as I'm concerned, progressive does not always mean extended song lengths, and a portion of the EP would benefit from a good trimming.

On the flipside, Testimony are quite musically accomplished, utilizing everything from standard power chords to scale-based climbs that recall bands of olden days. For what they lack in writing expertise, they make up for with charisma and energy, which can be tough to capture on record, yet alone a freshman release. Tempo changes accentuate the inner monster called progressive metal, while the choppy, staccato riffing gives a nod to thrash. In other words, neither subgenre dominates one another.

In the end, though, Transcending Reality amounts to nothing more than an subpar release from a neophyte band. Songwriting suffers in favor of instrumentation--a phenomenon many progsters struggle with--so I'm not as taken back as I should be. Ultimately, there is potential here, but it's bottled up and utilized in the wrong way. In my eyes, songwriting comes first with musicianship in a close second.

How else do you get people to buy your records if you're in a metal band?