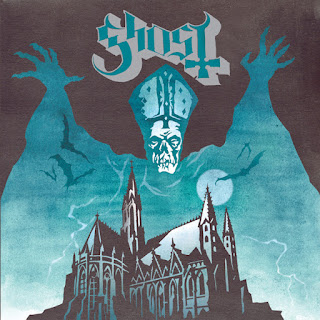 Countless people write Ghost off as a gimmick--unrightfully so, I might add--because they're concentrating too much on the band's identity/appearance and not enough on the music. Let's be clear here: these Swedes aren't the glam rock popular in the eighties that mostly relied on appearance over musical integrity. Ghost certainly isn't Poison.

Instead, it's safe to say that the band glorifies much of what was great about seventies rock and hard rock: hammond organ lines, memorable guitar riffs, and the occasional pop-laced chorus hook. Deep Purple, Blue Oyster Cult, and Uriah Heep all pitch in to form Ghost's core sound, but with a dash of Mercyful Fate thrown into the pot for good measure. Thoughtful Satanic imagery and mysticism had to come from somewhere, and Mercyful Fate were the most logical place to pick from.

Because Ghost got their act together and stepped up to tour the United States, I nabbed their sole release, Opus Eponymous, off my shelf with hopes to rekindle my affection with the addictive Satanic pop. While it may seem cheesy, the Satanic odes are an important part of the band's identity because they fit hand-in-hand with their identity crisis. The intended purpose is anything but inconspicuous, but if you even have half a brain in your head, you'll realize it's meant to be a joke. Hardly anyone went nuts over what King Diamond and Mercyful Fate do, and one would at least expect a little tolerance over such trivial things like these in this day and age. 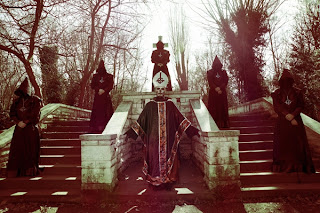 Occultism aside, Ghost's debut is very strong in the songwriting department and charged with poppy chorus lines that reel listeners in with creepy melodies. Totally absent from Opus Eponymous is the technical wankery of an act like Dream Theater but replaced with a band that actually knows how to write a compelling piece of music.

Much of Opus Eponymous is firmly planted in the seventies rock camp with the shove it needs to become metal and, once you're familiar with the sound, you'll have a feel for the rest of the album. Each song has its own unique verse and chorus section, with none sounding exactly alike, but the same formula repeated from "Con Clavi Con Dio" to "Prime Mover" can grow predictable. Barring the intro track and the closer, "Genesis," all songs are full of wonderfully daring lyrics, and although those two are instrumentals, they open and close the record perfectly.

And although some might proclaim Ghost as a gimmick, their music brings fun into metal and jokingly twists it with Satanic imagery. Their debut is astonishingly addictive, not to mention a throwback for those that lived in the seventies, and it pushes something new into the metal mainstream with pop sensibilities. Recommended. You'll have this record in your head for days.