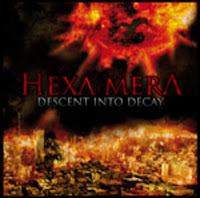 Sloppy, yet inspired, Hexa Mera hurl themselves across Brussels and out into the greater Europe area. The band are relatively young, forming only two years ago, but strive to make it big beginning with their EP entitled Descent into Decay.  I'm slightly lukewarm on the release, however, mostly due to the vocals, clumsy musicianship, and awkward song writing. Peculiar start-stop sections and unrefined transitioning are my main compalints, but there seems to be a burning passion for what Hexa Mera, despite the setbacks. Like a lot of young bands, I think these metallers have some degree of potential, but they need to learn how to harness their eagerness and control the reigns before arranging a song.

What I really appreciate about the record is its honest production values and guitar rawness. Drums are relatively polished in comparison to the mixing on the guitar, but that doesn't detract from the EP's overall presentation and only reminds you that this is a demo-like release. Vocals are slightly recessed and balance nicely with the instruments.

Now that I have that out of the way, Descent into Decay borders on melodic death metal and metalcore. Vocally, the EP is purely the latter and something I, only under rare exceptions, enjoy and normally prefer a more thick, low-hanging death metal growl. Instead, Yannick Schmit favors the usual metalcore fry scream, which is not a personal favorite and quite monotonous. Many of my problems start and peak with that twinge; the rest, in comparison, are minor.

Nevertheless, not all is lost because Descent into Decay puts forth good musical ideas, particularly harmonies and a number of riffing passages, but it tends to wander with inconsistent songwriting. On paper the design looks good, but execution takes practice, and that is where the band struggles. In light of the situation, however, this is only a freshman EP and bumps in the road are expected. After all, Hexa Mera are still getting acquainted and learning the ropes.

The band needs to work on writing and perfecting their instrumental skills. As I said earlier, the potential and drive is there, but fulfillment is key. The game plan looks solid for Hexa Mera as long as they master a few pieces of the puzzle.