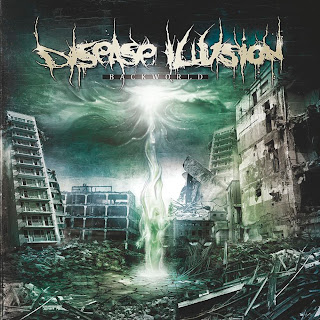 There's a damn big sea of melodic death metal bands out there. Everywhere you turn, someone else is trying to imitate someone else, and allure quickly drops off because you've heard it all before. Disease Illusion aren't original in the slightest, but their debut album, Backworld, is still worth a listen.

Like a lot of music in my blog, I wasn't actively searching out Disease Illusion. Their record sort of fell into my hands and begged to be listened to when an email landed in my inbox. At first glance, I got a metalcore vibe from Backworld's album cover--mainly because of the overstylized logo--and while their music retains a slight metalcore vibe, mostly due to the vocals, its foundation is melodic death metal. As I implied, these Italian metallers are derivative of the subgenre, but they do what they do well, creating an explosion of melodic bliss and a wall that your mind can't possibly take in during the first listen. Most songs suggest a similar theme--one that revolves around the same idea--but slightly mixes the formula with an altered melody line. For a debut, though, Backworld is perfectly listenable and fun at that.

I have few complaints about the record; the vocals might not be my favorite because they're not guttural enough and deviate from the death metal norm that I love, but they're not substandard and fit the music just fine. My biggest gripe, however, is how similar most tracks sound. As I previously mentioned, it's definitely not a bad thing, but they latch onto one another and create a mass of melody, indistinguishable from what came before until you really know the album. Backworld necessitates repeated listens and rewards the listener when song analysis allows each to be recognized easily. Aside from that, there's not much to hate here unless you're completely sick of what melodic death metal has already done.

What surprised me most about the album is its production. Many debuts are marginally more raw than what follows them, but Disease Illusion opted for a polished, digital-sounding production that's quite fitting for a modern melodic death metal band. They've got the chops to back the sound, too, so everything fits hand-in-hand. Now that I think about it, I should have expected such a production based on the cover art. Digital art, digital production... That would be today's standard, wouldn't it?

While you may gather a somewhat negative vibe from my review, that's not the case at all. With the release of Backworld, Disease Illusion show promise, especially for a fledgling band. They've got the skills and composing technique, but they need to branch out to get additional exposure. They've got a good thing going on here; they simply need to add a little bit of their diseased spice into the music, instead of taking a page from someone else's book. It's staggering to find out they're an unsigned band, too. Someone sign these guys!