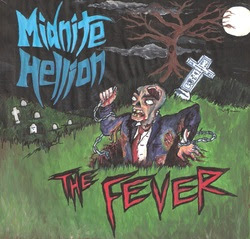 Looks like traditional heavy metal and its various hybrids are back en masse; Midnite Hellion are part of the movement, though they aren't strictly traditional heavy metal, but a fusion of it and speed metal. In 2011, the band released their first demo, The Fever, solely on cassette limited to 100 copies, making it a small collector's piece. I've never been a huge fan of the cassette due to superior formats existing in terms of ease of use and sound quality, but when a band does it for a limited demo such as this, I can deal with it. Delightfully cheesy, the cover art is charming and perfect because it presents itself as an excellent illustration of the decade the music appears to have to come from: the eighties.

The Fever owes its nostalgic mid eighties feel to, not only the unrefined production, but the music itself, a careful reconstruction of heavy metal of the time. Despite bringing in extra influences, Midnite Hellion faithfully mirror their idols, a modest tribute to those who walked the metal earth 25 years ago. I hear snippets of U.S. power metal acts, in addition to standard heavy and speed. Tonally, the band capture the decade in a jar, shoves it onto tape, and offers it to the hardcore fans. Sounds familiar, right? Definitely. These are the kinds of bands that made me wish I lived in the eighties because I would have learned of the obscure artists that didn't survive the decade. Already we have something special with Midnite Hellion, but I might just be longing for something I never experienced.

So, the band and I are off to a positive start because I'm reminded of my favorite time period for metal. But there's one glaring flaw that drags the release down significantly: the vocals. Generally, they're shrill to the ear because, more often than not, they're out of tune. It's really a shame because I love the instrumental part of Midnite Hellion, but the music fights with voice, constructing a proverbial wall between the listener and the tracks. Though I assume he could improve with training, as it stands, I'm not a fan of his vocals because they're weak, lack power, and don't mesh with the music at all.

I essentially end up being torn between what I dislike and like on The Fever. On one hand, the demo contains great guitar riffs surely any rocker would be proud to add to their collection, but the vocals play devil's advocate, testing my patience with the overall presentation. Bleh. It's true what they say, vocals can make or break a band for a listener. Others may genuinely like them or find it in their hearts to ignore them, but it's tough to do because I analyze music as a complete package. Nevertheless, Midnite Hellion are hard at work on their first EP, so I hold hope in my heart that the situation will improve, and they step up their game. This is a demo--perhaps not indicative of the band's full potential--but I'll reserve judgement until then. Let's just hope they keep on dishing out those classic riffs.