A Smattering of Thoughts on Judas Priest

Being back at school gives me countless hours to think pointless thoughts that would never cross my mind otherwise. I imagine this is a product of returning to the grind--stresses enter the brain and make us do funny things, but the peculiar thing is that, in the midst of all this, I'm pondering Judas Priest's influence on metal as a whole and their individual history as a band. And, at this very moment, I have the classic "Sinner" playing through my headphone setup in all its glory. I suppose that could be the reason I'm amusing myself with this, too.

Nonsense aside, Black Sabbath might be accredited with inventing heavy metal, but Judas Priest arguably dropped the blues influence, thus honing it into something purer and deserving of the genre name. That's not to say Black Sabbath wasn't deserving--they certainly were--but their very early material appears to have traces of what predated heavy metal's perceived core, namely the bluesy vibe so many bands tapped for inspiration. Initially, Judas Priest was indeed guilty of this, but with the release of Sad Wings of Destiny, the band became a bona fide '70s heavy metal band, which surely makes one wonder: was Judas Priest actually the first heavy metal band, despite what critics preach? I can't decide that for you, but it's definitely something to consider.

In addition to Halford and company's unparalleled musical influence, Judas Priest had an aesthetic quality that became a strong standard for hard and heavy bands throughout the '70s and beyond. It was darker in nature and at the same time controversial, which only explains the initial shock toward heavy metal music's themes and overall philosophy. The spikes, leather, and motorcycles were all new concepts; those who took notice immediately adopted the "look." Of course, it's hard to judge the influence Judas Priest really had on the scene because of the lack of media coverage in the '70s (Where would we be without the internet today? It's invaluable for music...), but it's largely known, or at least thought, that Priest was the first to use this type of fashion in mass quantity.


It's no secret I consider Judas Priest's '70s albums to be the best work they ever committed to recording. I don't think British Steel deserves all the praise it gets, especially when it's home to drivel like "Living After Midnight" and the dull and overpraised "Breaking the Law." Both tracks are obvious plugs toward commercial adventures, in no small part due to the turn of the decade, which ushered in a new era for Judas Priest, but I can't excuse the band for their choice because a time period came and went. I'm altogether lukewarm on the collective round of '80s material because it dropped much of the potency and command their '70s work had. Screaming for Vengeance and Defenders of the Faith are admittedly quite good, with Ram it Down contributing to the cause with some excellent material, but, on the whole, Priest was watered-down in the '80s. I guess what bothers me most about their music ('80s) is the drumming. Much of it is lifeless, uninteresting, and the lack of effort is irritating. 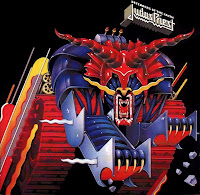 The band would redeem themselves by 1990 with Painkiller, but the celebration would not last long enough for most fans to rejoice. Halford decided he needed a "break" from the band and left to pursue other projects and his own solo career, leaving Judas Priest in somewhat of a bind to find new vocalist. Though Rob was not to be imitated, Tim "Ripper" Owens stepped into the fold, virtually matching Halford with his impressive vocal range; Owens left no leeway for Rob's fans to claim he was better on more technical merits (he really was the perfect replacement). Although fans recognize the Ripper years as a grim spot in Judas Priest's past, I find Jugulator and Demolition welcome experimentation in sound, in part because they flirted with heaver influences, notably thrash and groove metal. Halford naturally returned, but the band hasn't managed to excite me in the same way past material does.

So, where is the band today? To be fair, they're still trying. Halford has lost a large amount of his upper register, and Priest's most recent release, Nostradamus, turned out to be a failure of epic proportions from production to raw enthusiasm. The band even surfaced on American Idol, which I find low and desperate. Personally, I don't think metal bands have any place on a pop culture show, no matter how accessible or historically important they are, but I sound like one of those chronic complainers who groan about anything and everything. With the departure of K.K. Downing and addition of Richie Faulkner, it should be interesting to see what they do next--after their "farewell" tour, that is.

Despite Judas Priest's shortcomings, they're still one of my favorite bands, and it's entirely appropriate to conclude with a slice of their '70s legacy: "Tyrant"