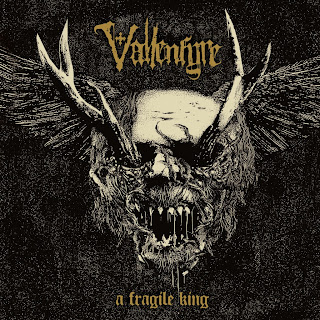 After seeing a handful of friends enjoy Vallenfyre's debut on Last.fm, I gathered they were, at the very least, worth checking out, and only then did I decide they were band I needed to add to the never ending list of music to look into. For whatever reason, Vallenfyre pushed their way to the top of the list past bands I've had indexed for years, when I chose to purchase A Fragile King from Amazon. I can't say I was anticipating the album's arrival, like say, a new Iron Maiden record, but I was surely intrigued at what I was going to find upon popping the disk into my CD player.

Being composed of members from legendary bands notwithstanding, I'd vouch Vallenfyre very much need an introduction, especially if you're not familiar with death metal. Members of Paradise Lost, My Dying Bride, and At the Gates call the band home, and while I don't have a vast amount of experience with any of those bands, I assumed the record was going to be an excellent listen because those groups have a mythical status throughout the metal community. I wasn't wrong on my assumption, as the majority of A Fragile King is fantastic, but I find most of it feeling too samey. It's like the eating steak for a week in a row--yes, it's delicious, but it gets old quickly. They're almost too consistent.

You might proclaim the album as a total loss at this point, but, in reality, it's far from it. The razor blade guitar sound is excellent and awfully reminiscent of older death metal from the early nineties. And that's exactly the kind of sound I think Vallenfyre was going for. After all, they're a part of the ever-growing OSDM revival movement that continues to thrive in many places in the world. The musicianship is quite good, too, though I expected nothing less from a band carved out of veteran members; their collective sound melds together to build upon what's already been established, and it's something you might think you've heard before, yet you pick up upon new elements that make them at least appear individualistic on the surface--and that's good enough for me.

A Fragile King is definitely satisfying, but there's room for improvement. It's a tad too bland and samey sounding, but it's without question not a bad question. Even if I don't exactly want to pop the album into the CD player all the time, it's still odious old death metal that warrants a look and important for first time death metal listeners, who I wholeheartedly recommend the album to.