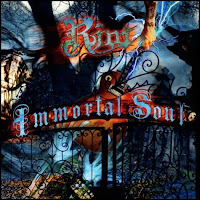 Maiden and Priest: start taking notes. This is how you do heavy metal, instead of overly boring and drawn out pretentious "creativity" you both committed to recording for your last albums.

It's been five years since Riot's last release. Despite not giving that record a listen, I was still very excited to see what the band had in store for 2011, and I wasn't let down even in the slightest. But I did have my doubts because, since reuniting in 2006, Riot went through a period of ups and downs, most notably losing Tony Moore once. Thankfully, he decided to return.

Although Riot aren't exactly known outside of cult circles within the metal community, their importance can't be argued, and Immortal Soul carries on the tradition that began with Thundersteel, a culmination of heavy, speed, and power metal the band took up after they decided to move away from their heavy metal and bluesy hard rock roots. For Immortal Soul, this perfect Riot line-up is together once again, and the results could not have been more grand.

Most surprising, however, is how good Tony Moore sounds after taking a lengthy break from the music scene. While he isn't pitch-for-pitch matched with his Thundersteel performance, his voice is in tip-top shape, besting his peers Bruce Dickinson and Rob Halford. My only complaint toward his performance is how he chooses to use his head voice when he can clearly hit the desired pitch. Check the chorus to "Wings are for Angels" as example. I find it hard not to compare Moore to Bruce and Rob beacuse the tracks on this album capture what those two bands should be putting under their legendary namesakes.

A little less surprising is the rest of the band's performance because I don't expect their musical skills to deteriorate. Jarzombek remains a living legend behind the drum kit, Reale still offers punchy, melodic, and bluesy leads, and the rest of the guys are solid as ever. The song writing is typically based around the same type of hooks that appeared on Thundersteel--catchy verses and explosive choruses--which is definitely a throwback to the glory days. Songs cycle between heavy/speed/power metal bashers and more melodic, slower tunes. Not so different than previous releases. I'm particularly happy that there aren't any ballads on the record either as it showcases Riot's powerful return to the metal scene.

Apart from rumors and talk across the internet claiming Immortal Soul as comeback of the year, I didn't know what to expect from a newly reunited Riot. But all the big talk turned out to be well-deserved hype because the record really is a natural extension of Thundersteel. Better late than never, I suppose, a mere 23 years later. Reale and the boys have crafted something energetic and creative defying their ages, hinting at what Riot could potentially offer the community in years to come.