The modern death metal scene is filled with wannabes and cookie-cutter bands alike, but with the release of their newest record, Fleshgod Apocalypse manage to distance themselves from the so called "generic standard." Their previous release, an EP called Mafia, was a fantastic blend of classically-tinged technical death metal that really spoke to the majority of community with a balance between  string instruments and distorted guitars. Agony bases itself on Mafia's formula, yet introduces a number of new elements, but tends to alienate  or gain new fans, depending on personal tastes. Was this the band's intention?

While the record builds upon familiar ideas, Agony still manages to sound fundamentally different from its predecessor. Taking a page from classical's rulebook, and using Mafia's strong base, the twist comes in the form of an overbearing orchestra, where guitar riffs are brutally slaughtered one-by-one under a wall of sound. The real meat of the music is rather distant feeling when compared to Fleshgod Apocalypse's previous releases, and not entirely desirable for something that claims to be death metal.

Irritatingly, Agony has little variation in songwriting or instrumentation as well. Blast beats come en force, never stopping, and the overeliance on violins, cellos, and similar instruments make the album a chore to sit through for more than a few tracks. The music is essentially rinsing, lathering, and repeating for the record's entire run-time, save for songs like "The Forsaking," which slow down enough to actually be enjoyable for a minute or two. 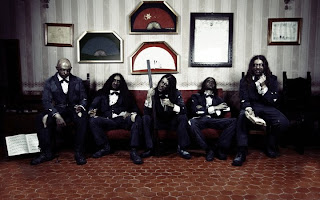 Even the production can't escape some nitpicking. The guitars lack bite and bottom end, making the sound thin and almost as if attending a concert in an orchestral hall. The drums, on the other hand, are much too loud, but they help combat the orchestra, which is undoubtedly the record's worst quality and, should it carry over to the next release, a deal breaker for many, many listeners.

As much as I like Fleshgod Apocalypse, the band undoubtedly ran into a lull with this record. The fanbase seems to be split down the middle, with those loving and raving about the album and some even going as far as to say it's the best thing ever; others are struggling to think about what the Italian death metallers will do next. I unquestionably fall into the latter group. Although I've given Agony more than enough time to grow on me, I'm going to stick it back on the shelf and hope it clicks with me a few months from now. For the time being, I'm going to act like Agony doesn't exist, and go back to enjoying Mafia.