Currently, I'm giving Fierce Band!'s new track "Blue Liquid Lips (Pts 1-2)" my first listen through. A friend, who happens to be a big advocator of the local music scene in Texas, passed the track off to me and, without him, I likely would have never heard of a group as small as Fierce Band!. I'm not quite sure I understand their name, but there must be some sort of inside joke behind it, though that's the least of my worries when checking out new tunes. The music matters, not the name.

Fierce Band! mesh progressive metal with death metal, with the death metal emphasis in the vocals, and I'd say it works out pretty well. Like anything of the progressive nature, it takes repeated listens to truly understand. Jammy and loose, the track reminds me of one of those practice sessions I had with my buddies back in high school. Those were the days--shooting the breeze; talking with your instruments without a worry in the world.

Download the track here and enjoy. It's a bit lengthy, but what did you expect from something labeled as progressive?

Nodding Sky - "For Those Left Behind"

Mark my words, these guys have the potential to get big. Nodding Sky recently struck gold, and I'm really enjoying what I'm hearing. Give 'em a listen--you might be surprised.

I remember when blackened thrashers Skeletonwitch had no music videos whatsoever, but when I took a look a few months ago, they magically had a few. One of them happened to be an unreleased track, so I eagerly checked it out, only to find it's a bit lackluster. That's fine, though, because it's been tagged as unreleased. Even more dissatisfying is how crude the music video is. Zombies fighting enlarged stuffed animals with a hint of raunchiness thrown in? No thanks. That's just tasteless. 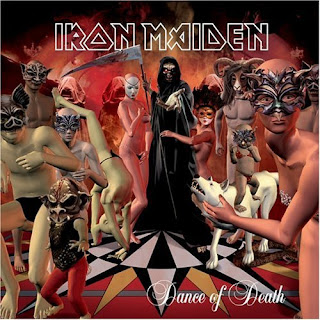 It's not an easy task to review an Iron Maiden album, especially when I find myself heavily biased toward their work made in the "Golden Years," rather than their recent releases like A Matter of Life and Death and The Final Frontier. From the albums offered post 2000, the first two, Brave New World and Dance of Death, are modern Maiden at their best and showcase compositions filled to the brim with creativity. My pick for best album after 2000 is, without question, Dance of Death because it models itself after what made Brave New World so great, yet adds more to the musical melting pot. The record has it all; short, fun rockers like "Wildest Dreams," melancholic pieces like "Paschendale," the abrasive "Montségur," and the somehow calming "Journeyman" with its smooth and serene acoustic lines.

The Metal Advisor Now has its Own Domain Name

Exciting, isn't it? Now you'll be able to find The Metal Advisor more quickly and efficiently - and you can easily share it with your friends and family too.

See? It just rolls of the keyboard! Just click it. You know you want to.

Thanks for the continued support,
The Metal Advisor

The modern death metal scene is filled with wannabes and cookie-cutter bands alike, but with the release of their newest record, Fleshgod Apocalypse manage to distance themselves from the so called "generic standard." Their previous release, an EP called Mafia, was a fantastic blend of classically-tinged technical death metal that really spoke to the majority of community with a balance between  string instruments and distorted guitars. Agony bases itself on Mafia's formula, yet introduces a number of new elements, but tends to alienate  or gain new fans, depending on personal tastes. Was this the band's intention?

While the record builds upon familiar ideas, Agony still manages to sound fundamentally different from its predecessor. Taking a page from classical's rulebook, and using Mafia's strong base, the twist comes in the form of an overbearing orchestra, where guitar riffs are brutally slaughtered one-by-one under a wall of sound. The real meat of the music is rather distant feeling when compared to Fleshgod Apocalypse's previous releases, and not entirely desirable for something that claims to be death metal.

Immolation's Providence isn't easiest EP to get a hold of because the band intended for it to be given out to show-goers only. If you didn't have time to see Immolation live, you were probably out of luck if you really wanted a copy--or so I thought. Thanks to Gogmagogical, I now have a copy of Providence sitting right beside me, and the feeling is oh-so-sweet. I'm still jealous he saw Immolation live, but the EP is a sweet little souvenir (for something I didn't even attend!). I suppose there's always next time.

The majority of these maildays were an effort to fill in gaps in my collection, and often albums I should have picked up a long time ago. There are a few records that aren't metal, too, (maybe a curveball or two if you aren't familiar with my musical taste), but you can always expect that when I decide to purchase music. Shoot, I need to do a "Recent Hauls" post to gather brief thoughts on these records. 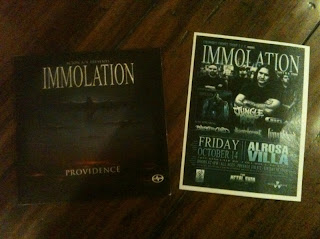 I may not have been introduced to Heathen with their "classic" records, but The Evolution of Chaos does a damn good job of capturing the thrash attitude, both in spirit and aggressiveness. Eras be damned; this record is fine addition to any band's discography, easily standing up to material deemed essential by long time followers. The fans agree, too, because the album effectively has the seal of approval from nearly every metalhead who gave it a listen at its release date.

All joking aside, The Evolution of Chaos is what both modern and veteran thrash metal bands should aspire to be. Many acts releasing music in this day and age, however, won't ever touch this record, let alone top it. But that's fine because we have this album to lose ourselves in, immersing ourselves in the world of a reunited and rekindled Heathen. The guitars are vicious, thanks to an absolutely massive production and push the drums to the forefront, creating a wall of relentless sound. While the production certainly sounds the part, it is not without compression and clipping--perhaps the only letdown here.

As cliché as it might seem, Heathen have made a convincing formula for modern and veteran thrash metal acts to follow. They obviously fall into the veteran camp because they formed in 1984, but music should not be judged by age or year of creation--meaning both newer and older groups are capable of making great tunes. The formula Heathen have in hand is simple: to create fresh music, rather than blatantly rip-off what's been done before, while holding themselves to a high standard.

In the News: Immolation's Providence 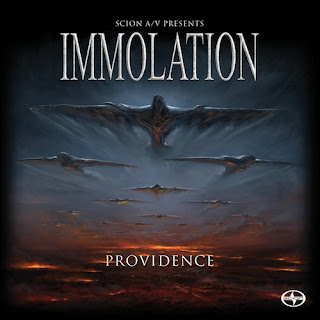 So begins further forays into Immolation's discography; this time with their latest EP called Providence. Available physically (CD or vinyl) free of charge at shows, this extended play is a bit of a let down to hardcore fans who can't make it out to the events, and I'm positive hoarders will have multiples copies up on eBay once it has been released. Luckily, if you're a more casual fan as I am, you won't mind having it digitally. I'm ahead of the pack on this one, as well, because I've had a chance to hear it despite its release date being two days from now.

Since I've had time to let their latest album Majesty and Decay grow on me, I found it easy to jump right into Providence thanks to a seemingly natural progression. It wouldn't be absurd to assume most songs on the EP could have made the last album.

You've already seen it mentioned in a "Recent Hauls" post, but Kvelertak's self-titled debut is one of the best albums I've come across this year. Some might call it party metal/hardcore, but there's no denying how entertaining the band's blend of rock 'n' roll is, and how addicting it can become after the first listen. People who dislike fun music are generally buzzkills, anyway.

Kvelertak's approach to making music isn't shrouded in mystery, so you won't be calling Scooby Doo to help you out with this one. The formula is simple: take a few power chords, some harmonized lead parts, a big dosage of "rawk," a bit of black metal, and hardcore influence, and the amalgam will be these nice Norwegian chaps. The black metal influence is typically limited to a few passages here and there, so it's much easier to call Kvelertak a melodic hardcore band or, more simply put, a rock 'n' roll band. 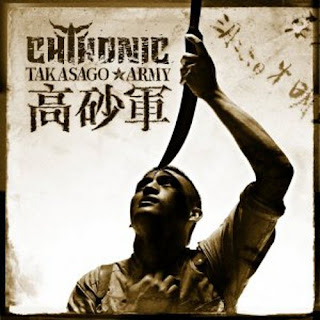 From my first listen through Takasago Army, I wondered how it could be categorized as straight black metal because, in the general sense of the style, most of the music on the record has little, if any, resemblance to the subgenre. Most of songs would fit well under the melodic metal umbrella, if not the melodic death metal subgenre. Some tracks might be filed under melodic black metal with symphonic bits and occasional tremolo picking, but I find the music too chuggy to be included there. As I've seen the band say before, they cannot be categorized, and I wholeheartedly agree because Takasago Army is essentially whatever it wants to be, unhindered by boundaries created by subgenres. Further forays into Chthonic's earlier work should prove to be interesting beacuse I'll get to see if there is a pure black metal side to the band.