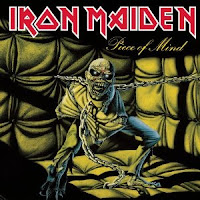 Thinking back on it, all those years ago, Iron Maiden was the band that got me into metal. The album Powerslave was apparently the one that did it because, according to my parents, I used to sit in the back seat of their car, headbanging and begging for Iron Maiden to be put on over and over again. To this day, that Egyptian-themed piece of distortion-heavy goodness is my favorite album and likely to never be dethroned. My mother didn't exactly approve of a two or three year old looking at album covers adorned with Eddie, either, so she hid the cassette covers from me, eventually--and much to my dismay--discarding them in the trash. Luckily, I still have the cassettes laying around the house. I don't ever play them because I have the albums on vinyl or CD, but they hold a special place in my heart.

Over the years, I've seen Iron Maiden live four times, amassed quite a collection of band memorabilia, had Mr. Harris throw me his sweatband at one of the shows, and even have the Iron Maiden Signature Stratocaster that was released for one year in 2001. It's safe to say I was once Maiden obsessive at one point in my life. I remember when Iron Maiden were the only [well, almost] band I listened to, but, as of late, I've become a bit more critical of their work and generally expect more when they release new albums. The last two records have been decent. I'll say that much. But they don't hold a candle to the golden age era (1980-1988), and they don't stack up well against Brave New World or Dance of Death.

It's strange because a band with as high stature as Iron Maiden shouldn't release the same tired material again and again--a long, drawn out clean intro + a transition into the heavier part of the song. Rinse, lather, and repeat. They seem to have settled into comfort zone, and one that they won't be able to make it back out of. Of course, I can complain all I want, but Maiden are going to be Maiden, and do exactly as they wish. That's the beauty of it.

I suppose my point here is that, even though I don't exactly adore the most recent two albums, Iron Maiden are still one of the of the most endearing heavy metal bands. Their influence on music and relevance to the current metal scene is undisputed, and they have made essential contributions to metal that cannot be ignored.

Best band ever? Yeah, I think so.