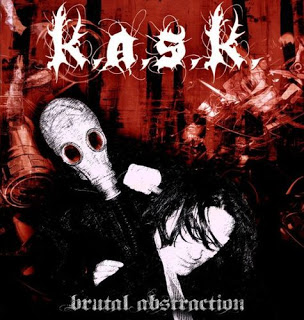 I love being contacted by bands that ask me to listen to their material and hope for me include it on The Metal Advisor. The feeling of getting personal with the music is fantastic and talking to the musicians themselves is certainly the best way to do it. I genuinely appreciate artists that inquire about being included, even if their tracks aren't exactly my cup of tea.

That being said, Marcin Kwiecinsk, of K.A.S.K., recently reached out to me from Poland. Smaller bands like K.A.S.K. are usually my specialty because they enable me to express myself on a personal level that I might not be able to achieve with bigger acts like Judas Priest. I can chat with the members, ask them questions about their music, and even interview them--everything a blogger ever wanted.

But despite that, it's easy to label K.A.S.K. as bandwagon act, even after talking with them. No doubt are they slightly different in that they draw more influence from death metal than modern hardcore/metalcore; but, nonetheless, there's a collective blanket of breakdowns scattered around the good parts of the music that creates an aesthetic that I'm rarely, if ever, in the mood for.

Likewise, each track is filled with "been there, done that" feeling you know you've heard somewhere before. Nearly every breakdown on the Brutal Abstraction can be copied and pasted to a deathcore band of your choice; although I find the death metal-inspired sections decent on the whole, but nothing to get excited about because they're merely borrowing from various influences.

Like many fledgeling bands, K.A.S.K. suffer in the vocal department. The vocals on this EP are painfully average, don't do much to strengthen the music, and I find myself hoping for an improvement upon the advent of new material. Brutal Extraction enjoys a reasonably good production, as well, and is certainly one that many small bands kill for because the sound is clear, has good instrument separation, and isn't over-produced.

If K.A.S.K. were to clean up their songwriting, too, they would see a serious improvement. It isn't simple to make something unique in this day and age, especially in metal, so I can't fault K.A.S.K. too much. Nevertheless, dropping the majority of breakdowns or incorporating them in way that sets them apart from other deathcore should be their next move.

I can, however, speak positively of the band's enthusiasm because, judging by the energy on Brutal Abstraction, the guys seem to have a passion for music, a drive that should carry them well into their potential full-length. If they become a bit more experimental and step outside deathcore, we could potentially have a winner on our hands.