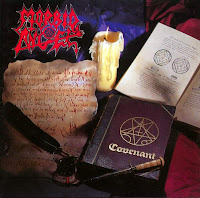 I apologize for the overload of Morbid Angel, but just last week I received Domination in the mail, and it had me blasting the Floridian death metallers even more than I usually do. The record's arrival brings my Morbid Angel collection to a somewhat pathetic three records, but, sadly, I'm underwhelmed with it because half is pretty good, while the other pales in comparison. I suppose should pay attention to the reviews on Metal Archives, but I've encountered quite a few albums the community seems to dislike that I've really loved. Meh.

Since Domination is mediocre, especially for band who brought Altars of Madness to the masses, I've been revisiting that very record and Covenant often in the past few days. I can put on either of those records, regardless of mood, and enjoy them because they're my feel good music that never gets stale. These records ain't Illud Divinum Insanus, which is a rather fetid attempt on Morbid Angel's part that permanently stained their name. If f you're considering buying one of them, just purchase both and kill two birds with one stone.

It's tough for me to pick one song when taking two excellent albums into consideration, but since I've been listening to Covenant lately, I'll pick a track from that record. I'm going to go with "Pain Divine" because I love the shouting out the lyrics:

What specifically draws me to the song is the way the instruments work together to form a wall of sound and mass of speedy tremolo-picked guitar riffs. Indeed, I can't forget about Vincent's vocals, either, which sound absolutely vicious, and the way death metal growls should.

Without a doubt, Morbid Angel are one of my favorite bands.