A Few Words About the Obscure Demetori... 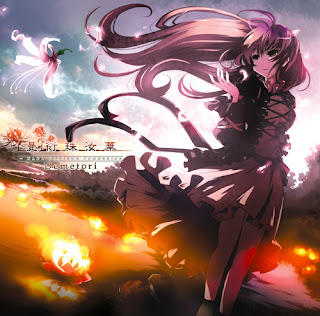 Prior to my summer vacation, I was blissfully unaware of the music phenomenon going on in Asian countries, specifically Japan and South Korea. Regardless of language, the bands coming from these nations are addicting and relatively innovative--well, to my ears. While not every single artist I've come across has been strictly metal, I will say the more metallic acts are among the best.

Turning the page leads me to Demetori. You may remember that I blogged about the two-man project when I first discovered them, which left me extremely impressed. Demetori are actually very interesting because they don't write their own music, but instead base their craft off compositions from a Japanese video game series called Touhou. The results are astonishing instrumental metal covers that make me want to spin the music over and over and over.

Because I've never played this game series, let alone laid my eyes on screenshots, I have yet to hear this so called "godly" game tunage. Despite that, I don't find myself wanting to because Demetori do a heck of a job of writing punch-in-the-gut metal riffs backed by powerful, stampeding drumming. At the core, however, remains Touhou music and, if I didn't know any better, I'd think they were a completely original instrumental band.

Naturally, because I've been so "into" Demetori, Masaru Taramae has effortlessly climbed the ranks becoming my favorite guitar player. I'll totally admit that my favorite always changes, but Masaru has held the position for a long time because I love the way he strings riffs together, his overall technique and sense of melody, and his ability to lay down a scorching hot guitar solo. Stylistically, he weaves in and out between power metal, power-thrash, and heavy metal with a dash of djent and progressive metal.

Sadly, it's near impossible find physical copies of Demetori's work outside of Japan (and even on the internet), so I've had to look to other means to hear their tunes. As of now, I've heard four of the full-lengths, leaving me with another album and a split to locate. I think I'll let the four I've already heard sink in a little more before I piece the rest of the puzzle together, as I savor every moment I get to listen to this instrumental duo. Lengthening the experience is key.

If you haven't heard Demetori by now, shame on you. Do yourself a BIG favor and start with Il Mondo dove e finito il Tempo, Offering to the Sukhavati, or 曼衍珠汝華 ～ Nada Upasana Pundarika. It's difficult to fault any of those albums because they're instrumental masterpieces in every sense of the word.

I sincerely hope that the Demetori crew release some new material as soon as they can; better yet, original material because I know they're capable of it.