Discoveries of the Week Part Eight 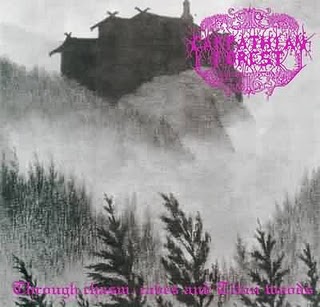 I typically do this write-up every Friday, but I decided to postpone it in favor of an album that was supposed to arrive, hoping it would be prime material for this post. Luckily for me, my order got canceled TODAY five or six days after I placed it. Grand. In addition to that, I had another album coming that I would have liked to include, but the seller sent me a DVD by mistake. He did, however, take all responsibility and refunded my money. Seems there are still decent people in this world after all.

Unfortunate series of events aside, I have come across quite a few interesting bands lately, mostly due to the help of Last.fm. I am extremely well-versed in just about every metal subgenre, but I will totally admit to being somewhat lacking in the area of black metal. I've certainly been exposed to it throughout the years from a high school friend and by the handful of bands that I like, but there are countless groups in the subgenre that oddly were off my radar.

Enter Carpathian Forest. These guys are one of the "original" Norwegian black metal bands from some of the earliest days of the subgenre's development. Upon getting the record in the mail, I was expecting a ballistic, frenzied black metal attack akin to something like Darkthrone, but instead I got heavily (and I mean heavily) punk influenced black metal. Punk has always played an essential role in influencing metal of all types, but here it seems to coexist peacefully and mesh with metal seamlessly. Through Chasm, Caves and Titan Woods blends traditional style black metal vocals, punk, and metal on tracks one, two, and four; tracks three and five are from a previous release and give off a subdued and darker atmospheric vibe. Originally, I thought those two tunes threw the flow of the EP off, but after quite a few listens, I appreciate them, decidedly deeming them as worthy of being part of the record. Overall, I highly recommend that anyone gives this brief little EP a listen as it was likely a pillar in early black metal and because it is pretty darn good on its own, anyway.