What is it About Vinyl? 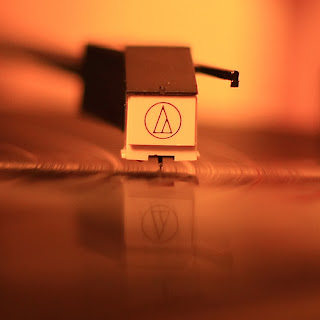 Seriously, what is it about vinyl?

While I will surely pick it up on CD in the future, I nabbed Jag Panzer's latest effort, The Scourge of the Light, on wax yesterday. There's just something about taking a look at enlarged artwork, album sleeves with easy to read lyrics, and the wax itself, whether it's traditional black or another hue from mother nature's color palette.

With modern albums, there's not really much of reason to purchase them on vinyl. I'm a firm believer that today's digitally recorded music will likely sound better on CD (unless it's compressed to death), which is fairly obvious. I spotted a few Lady Gaga albums on vinyl yesterday when I was at a local record store in Denver and quietly laughed to myself. But is it really a laughing matter? No, not really. As I've said before, a big part of vinyl's mystical allure lies within the experience. For many people, a requirement of top sound quality flies out the window when the needle hits the wax. It's hypnotizing to watch the needle make its way through the grooves of your favorite album, as well as hear the pops, hisses, and other various noises on a well-worn record or one that hasn't been taken care of properly. And then there's the warmer sound that vinyl offers, which quite a few people favor. I'm one of them.

People can advocate for digital or analog, but it's best to be a fan of both. You're only going to find some music on digital formats and others on analog. Unfortunately, there's the issue of ease of use with vinyl, and it usually = $$$, as well as being high-maintenance. Is there a setback to everything in life? Pretty much. Take your record collection for what it is, a rather fragile and primitive format with a few quirky qualities. You only live once. Why not enjoy your music in a unique way?