Occasionally, I'll stumble across something that immediately catches my attention, sometimes in a good way, sometimes in a bad way. For Tridon, it was the former. As some of you know, The Metal Advisor now has a Twitter account, and it has been very beneficial because I've discovered some fledgeling and obscure bands that are quite good, a lot of the time better than their bigger contemporaries.

Of course, Tridon are one of them. The band's vocalist, Rick Fredrick, started following my Twitter account, which sparked the inevitable "Hey, I gotta check this band out." I'm sure glad I did, or I would be missing out on some sweet tunage. From the my first listen of "10-Fold," I knew I was going to be hooked.

Based on the 35-second clip "10-Fold" put forth, I took a chance and ordered Lucky #7  (although it was a good chance, the kind you don't feel bad about), and the album arrived in a timely four days. Surprisingly, the band included two logo stickers with the CD, one of which will surely adorn my car window because I want the band to get noticed in any way possible. Word of mouth and anything that doesn't have to do with the internet ain't dead yet. Sure, Twitter/Facebook/whatever creates a prime exposure spot for bands, but I find the most fun way to discover a band is through a flyer, word of mouth, or even a blind buy at my favorite record store. Tridon appear to have the potential to turn into something big, but without proper exposure and the right connections, they aren't going to be fully realized. Let's make it happen!

Excessive rambling aside, let's take a look at Lucky #7. The band's Twitter describes their sound as a mix of haunting guitar melodies and hard-hitting vocals that take a listener on a musical journey. For the most part, I'd say that's correct.

I don't find the guitar melodies on the album the least bit haunting, but rather a nice blend of heavy metal and hard rock, forming a nice rocking foundation. The riffs are crunchy, yet somehow bouncy, and really get you moving and immersed in the music. There might even be a dash of alternative influence, but it's minimal. 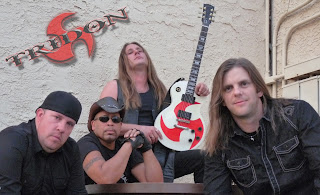 Based on riff passages alone (not to mention other musical elements), it would be wholly inaccurate to call them a metal band. Tridon's culmination of different styles puts them outside the heavy metal spectrum and into metallic one, which is effectively a hybrid of metal and hard rock. They're harder than your normal rock band, and harder than many hard rock bands, yet they don't always reach the level of Iron Maiden, a bona fide heavy metal band. This is what makes Tridon fairly unique in an age where being distinct is tough. Their mix of metal, hard rock, and a trickle of alternative is compelling, and it should get them noticed.

I find the rhythm section (bass and drums) on the album to be fairly tight, though there is at least one spot where the drums sound slightly off. I suspect the production might partly be to blame, but at the beginning of "Crash N Burn" the double bass part sounds out of line from the rest of music, slightly spoiling the experience for me. Luckily, I haven't noticed any other issues on other tracks at the time of this review.

I should mention Rick's vocals, too. I generally enjoy his tone and crisp pronunciation of lyrics, but I can't help but think with a little bit of training he could become an excellent vocalist. There are spots on the album where his vocals sound somewhat weak, and that is where vocal training would benefit him greatly. To be clear, I say this the best intentions possible, no bashing intended; I very much enjoy Tridon and their style. They just need to do a little bit of fine tuning. 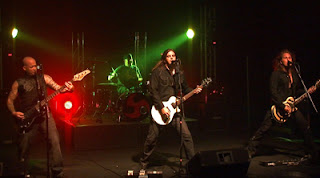 Constructive criticism aside, the production on Lucky #7 is very good. In an age where anything even slightly mainstream is overproduced, overpolished, and computerized, Tridon takes a clear and warmer sounding approach to their music. It sounds glorious, and it doesn't leave me out in the cold like, say, something like the production on Testament's last album. If you like the computerized sound, that would be your aural bliss. However, Tridon avoid sounding fake, and I love it.

Now that I've covered the gist of the album, let's look at the highlights. "Resurrection" is a track that anyone will be able to get into because of its simplicity and memorable melodies. "Torn" and "10-Fold" use the same formula, presenting a combo of hard hitting riffs and a hearty dose of "I'll stick in your head" type melodies. "Finishing off the Past" is another favorite of mine with its clean intro that transitions into a heavy riff. There isn't really a bad track on this album, but the weakest are "Crash N Burn" and "Letters."

Slight shortcomings aside, Tridon are a very charming band that are impossible to dislike. As previously stated, I really enjoy the way they blend their influences because it works well, coming together in a neat package that any rocker should be able to appreciate. The best way to describe the band's sound is accessible, but not in a mainstream type of way, if that makes any sense. In short, Lucky #7 is a very good, highly-enjoyable effort and I eagerly await more material from the band.

As Rick would say, "You rock!"