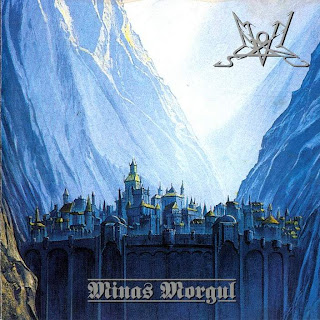 At this moment in time, I'm situated in a place that's neatly nestled in the mountains covered by lush, green conifer forests. I'm planning on taking the ever so cliché walk through the woods accompanied by a black metal band of my choice. I've only heard good things about going on this sort of walk, mostly in that it enhances the black metal listening experience. What do I have to lose, anyway? Nothing. As I've said before, I'll try anything music-related at least once. I'm an open-minded kind of guy.

Most of you probably expect I'll pick a band like Darkthrone or Mayhem. Nope. For this special walk, I'll be going with Summoning. The band's unique blend of atmospheric elements, medieval-like melodies, and Tolkien-themed lyrics scream "of the forest" to me.

I'll be honest here: Summoning has only recently clicked with me despite owning an album of theirs for quite some time. Though I wanted to hear the band's music, I initially became interested because of the cover to Minas Morgul. It's an amazing piece of artwork, one that screams fantasy in a world full of secrets and concepts that have yet to be discovered. I will likely hang the cover on the wall of my house someday, but that won't be any time soon. I'm only a college student!

When I first took a listen to the album, I was disappointed that it didn't live up to the reputation that its cover seemingly instilled. Happily, I have to say, I was very, very wrong. I simply didn't like the drum sound because they're programmed and have an inorganic, computerized sound that echoes off of walls. I truthfully feel like I'm in a different place when I listen to Minas Morgul because it portrays a vast world, a story told through music. It can be best described as an escape from reality, which is a sure indication that my walk will be glorious.