Discoveries of the Week Part Seven 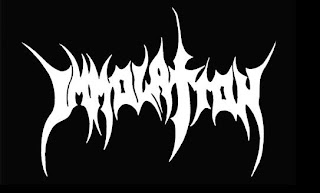 I posted about Immolation yesterday. Majesty and Decay is starting to sink in, and it's actually pretty darn good. Like I already said, I never had a strong interest in Immolation before I purchased this album. They aren't exactly a new discovery either because I already knew about them and had even heard a handful of tracks from this very record, but they are new in a sense that I actually own an album.

I want to take this post as an opportunity to introduce you to material from Majesty and Decay. I really am enjoying it, and it's just one of those things where I need to post about it. The best way I can describe the album's sound is dry--dryer than a desert. The production is pretty standard fare in that it's overly polished, but it has its own distinct character (due to the dryness) that I can appreciate. The riffs create a nice dissonant atmosphere, but because of the production, they are easy to follow and break down into smaller pieces. Vocals are typical death metal style, but extremely easy to understand. This album doesn't do anything wrong.