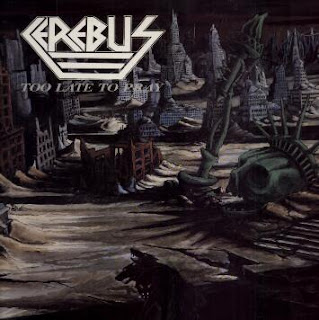 If you didn't know, a Cerebus is a three-headed hound that manifested itself in Greek and Roman mythology. Not getting the picture? Think back on that Harry Potter book or movie you read and/or watched. Gettin' it now? I thought so.

I've recently bumped into Cerebus and have found them to be a mesh of heavy metal and USPM. They're extremely enjoyable, highly skilled at their instruments, and write songs of good to excellent quality. However, I was disappointed to find out that they only released one full-length album, and that there's little hope of them resurfacing. Much like anything, nevertheless, I suppose that it is possible because NWoBHM band Hell recently released their first full-length album, despite forming in the early '80s.

Basically, it's perfectly fine to call Cerebus' Too Late to Pray a hidden gem. As with most records, the guitar riffs are the main attraction for me, but the vocal melodies are often very memorable; everything comes together to create a neat, little package.

One track ougta do ya some good. This is the first track I heard, consequently leading me to check out the full album.