I wouldn't be lying if I told you that I detested The Agonist the first time I heard their music. I dismissed them as the typical metalcore act--a mistake on my part--because I figured they rode the current mainstream trend of combining elements of hardcore/pop music with metal. Don't get me started on deathcore, either; that's a different story and even worse. Here's to hoping the fad vanishes soon.

It was only a few years ago that I stumbled upon The Agonist, too. They had all the makings of a metalcore band, like chugga-chugga riffs, generic breakdowns, and the worst harsh vocals you could ever imagine. As if fate, I accidentally ran into the band again during my freshman year of college. After giving them a serious look, I decided that they weren't all that bad because, yes, the harsh vocals were terrible, but the clean vocals were actually decent enough to keep me interested. And did I mention that The Agonist's vocalist is a female?

Yes, you read that correctly. The woman's got impressive chops. I just wish she would switch over to clean vocals entirely, but I digress. 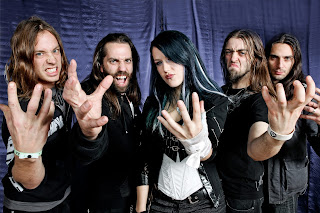 Really, The Agonist aren't your typical metacore act, despite utilizing many of the aesthetics. This is mostly due to the fact that their second record, Lullabies for the Dormant Mind, has quite a few symphonic elements and a melodic death metal influence reminiscent of In Flames and the rest of the pack. My interest in the band materialized from a combination of those things, along with the excellent clean vocals that tend to pull an emotional response from listeners.

Even though Lullabies for the Dormant Mind is a great album filled with energy that enjoys reasonable creativity for metalcore, listeners should avoid The Agonist's first album, Once Only Imagined, at all costs. It's incredibly generic, and the song writing is among the worst in the business. It's best described as the work of an amateur. Past that, however, I expect big things from The Agonist. Their next record should be killer.