Has the United States been Important to Metal's Development? 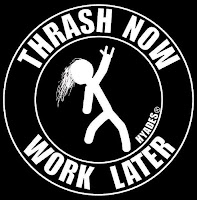 I'm currently in a discussion with a well-intentioned user of You Tube about origins of thrash metal, and the United States' overall role in the development of metal as a genre. The user in question claims that the most popular bands that helped spread thrash are from England, and that the USA has had little to do with development of metal. Well, with all due respect, that's flat out wrong. There are, in fact, some thrash bands that came from England, notably ones like Xentrix and Tankard, but the most popular and most important ones hail from the United States and Germany. For example, the big four (Metallica, Anthrax, Slayer, and Megadeth) all come from America, and there are a plethora of other bands like Overkill, Exodus, Testament, Nuclear Assault, Sadus, Dark Angel, Heathen, etc., and many obscure ones. Even more evidence are crossover thrash bands like D.R.I.. Germany has had the giant thrashers Sodom, Kreator, and Destruction, among others.

On top of all this, the user says the United States has had little to contribute to metal as a genre. That is wholly incorrect. First, death metal has very strong roots in America, particularly with the Florida death metal scene, which includes bands like Morbid Angel, Deicide, Death, Obituary, and others. Many of the of the subgenre's roots lie within the state, not to mention the host of other death metal bands that were active at the same time from all around the United States. Second, look above. Thrash's actual origins are in the United States. Heck, I could keep providing other examples from other subgernres of metal, but that should be sufficient. In short, it's just incredibly ignorant to say the USA has had little importance to metal when concrete evidence is right out in front of you.