Discoveries of the Week Part Four 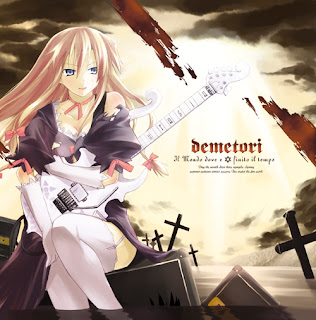 ...or should I say discovery? Nothing I've stumbled upon this week has come close to being as awesome as Demetori. Before this summer, if you asked me where the best metal came from, I would have likely given you an answer that included a mix of Europe, the USA, and Canada. However, I now find myself including Japan. My break from school has led me on a fruitful path to countless discoveries, helping me realize one thing: good metal can come from anywhere. Heck, I probably already knew that, but didn't realize it.

But I suppose I got a little sidetracked there. Apparently Demetori's discography is based off of music from an anime, but I can't tell you if that's true or not. Aside from a couple shows, I've never found myself interested in anime, and, to be completely honest, I'll probably never watch the series these songs pull inspiration from.

That's all fine and dandy, too, as they're great metal tracks by themselves. From what I've heard, Demetori's songs range from a mix of power metal, progressive metal, and wait for it...djent. Yeah, you read that correctly. It's quite an odd mix, but I really enjoy the djent material. It's much better than the so called "popular" djent bands like Periphery, who, quite frankly, have awful vocals. Demetori counters Periphery (and the like) with musicianship that's up quite a few notches and with all instrumental material, whether the tracks are power-thrash, power, or djent. Instrumental metal is a +1 in my book.

So, it's safe to say I'm impressed with Demetori because I've had a few tracks on repeat for a good chunk of the morning. Luckily for you, I'm going to post them below. Just a few words of caution: Make sure you're in a wide, open room while listening. These songs *might* make you want to mosh or something.