3 Inches of Blood vs. The Traditional Heavy Metal Revival 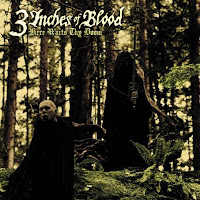 Is it correct of me to include 3 Inches of Blood in the NWoTHM? Most of you would probably chime in with a resounding "no." Well, I guess I'd better explain myself. Based on 3 Inches of Blood's material prior to Here Waits Thy Doom, there would be no way in heck I'd consider them a part of the movement, but once the band released HWTD, that all changed.

While the album clearly incorporates other influences, it has an old school vibe that I just can't ignore--needless to say, it's pretty darn good at encompassing the vibe that metal heads hanker and drool over. Let me explain; the first part of the vibe is the production. It's clear, yet not overly polished. Although I found it odd sounding at first, it clicked after a few moments, and I'm thankful it isn't similar to the production on Fire Up the Blades, which was way too computerized for my taste.

When I listen to this album based on the production alone, I feel as if I'm surrounded by a coniferous forest with my sword and shield while I look up at the snow covered mountains around me. It sounds hollow, yet full because the noise is bouncing off all the trees (I hope you're thinking "What is The Metal Advisor smoking here?"). You know that feeling you get from some metal bands where you're a warrior in simpler times? Yeah, that's the one I get, though I can probably thank the album art for that one. Now, the second part of the old school heavy metal vibe is specifically the music. It's not based around a chugga-chugga riff that sadly too many modern metal bands are guilty of using. Instead, they take influence from Maiden, Priest, all that other good stuff (though they always have).

As I've said before, I'm a total sucker for that type of stuff, anything that harkens back to pure, unadulterated heavy metal, and, thankfully, Jamie Hooper who did the metalcore-ish vocals on previous albums is gone. Can I get a high five?! He was terrible and unsuitable for a band like 3 Inches of Blood. Vocally, all the band has now is Cam on the highs and axe-slinger Justin Hagberg on harsh vocal duties. But don't worry. His vocals only show up occasionally and they're similar to that of death metal a death metal frontman. Luckily, he knows when to give it a rest, unlike Hooper who was always barking every freakin' second. Sigh... All the old school vibe really comes down to is the atmosphere and riffs, at least for this specific album.

So where am I going with this? I have no idea. Just don't dismiss this album as not being part of the movement because it says 3 Inches of Blood on the cover. Here Waits They Doom has all the right ingredients of a heavy metal album and it's worthy of the NWoTHM title, whether the guys in the band intended for it to be or not. The band clearly taps their influences with this record and it's readily obvious even when doing a quick surface listen (the kind where you're not analyzing anything). It was one of my favorite albums of 2009, and, to date, it's easily 3 Inches of Blood's best album due to riffs, Hooper leaving the band, and overall creativity.