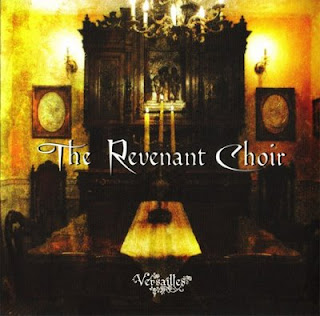 Japan: the land of technology, Grand Seikos, and nearly everything opposite of American culture. I've got to hand it to the Japanese; they know how to make an excellent product, no matter what it is, including neoclassical power metal act Versailles. Consider me thoroughly impressed.

Extreme theatrics appear to be first nature for the Versailles and an essential part of their identity. To be honest, I feel like I'm taking a step back into the seventeenth or eighteenth century when I watch their videos, thanks to baroque-era looking clothing and theatrics combined decidedly quirky music. Initially, I found myself wondering if the members were male or female but, in the end, it hardly matters because their records are, for the most part, about the music, not a gussied-up drag queen.

For the majority of listeners, the guitar playing will act as the main attraction because scorching leads wind around each instrumental section and occasionally accent the emotional, crooning vocals. The drumming and bass playing are top-notch, too, and never left out of the equation because they back the surprisingly prominent orchestral-sounding synth.

You should know that I can't write about anything without finding something small to nitpick about; this beef being the vocalist. I couldn't care less that I can't understand his singing because, quite frankly, I'm not listening to this band for lyrical content, but instead musicianship. I find his vocals to be a tad monotone, though his pipes aren't boring enough to make me kick the band to the curb, denouncing them as utter drivel. It only took one time to accustom myself, however lukewarm I might be.

I STRONGLY encourage you to watch the video I'm posting or, at the very least, listen if it's too odd. Passing up this band based solely on their looks will deprive you a unique experience few bands offer. Skip to about two minutes in if you don't want to watch or listen to the spoken intro.

I feel it's safe to say that Versailles has earned a numero uno spot on my "To Fully Check Out" list.