Say What? Judas Priest were on American Idol Last Night?

Yeah, that's Halford and the rest of Priest (minus K.K.) performing with an American Idol contestant. 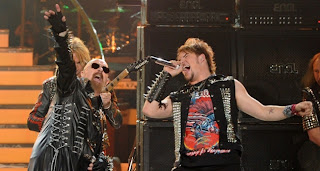 I'll be honest with you all. I was appalled that Judas Priest chose to perform on American Idol last night. Sure, it's understandable why they did it (money, tour promotion), but it irritated me to see one of the metal greats "sell out" like that (They've sold out before, but that's a discussion for another time.). On top of all that, their performance was abysmal with little emotion and featured a lackluster vocal performance. Rob, you just don't have it anymore.

That said, is Priest's retirement a good or bad thing? Just some food for thought.