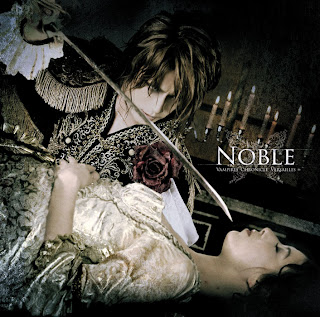 Because I was so impressed with Versailles' song, "The Revenant Choir," I grabbed their debut album off Amazon and have had it in my hands for about a week now. Needless to say, I'm enamored with it.

If you're looking for power metal in the vein of USPM, you should probably pass Noble all together, though it does have a fair bit of grittier influences. That's not say it doesn't have any power, but it's deeply rooted in European power metal sound, something that fans either seem to love or hate. Despite that, it definitely isn't cheesy in any way; those looking for an album full of songs to bash heads to should avoid the majority of the record's track listing. But there are some exceptions, however, like "To the Chaos Inside" and "Zombie," which are pretty darn headbangable, making you want to sock the guy next to you in the gut.

That being said, my favorite part of the album are the guitar riffs and leads that embrace neoclassical influence and don't let go. Imagine sitting in an opera or symphony hall, only to see a symphonic/neoclassical metal band burst onto the scene. Yeah, that. The riffs are played with the upmost precision and care, meshing extremely well with the layered synth parts and give the songs a massive feel (see "Aristocrat's Symphony"). Often they're memorable, not to mention heavy, and have a sense of technicality without being over-the-top. If that doesn't make any sense to you, use technical death metal bands like Necrophagist as a reference. Bands in that vein are technical, but they often have very little substance to their music (I'm not specifically pointing at Necrophagist here. They seemed like a good example to use.). I find Versailles to be the complete opposite (albeit less technical), as they should be, because they're a completely different subgenre of metal all together.

I should say that I'm not a drummer, but I have a good understanding of what's going on behind the kit and mechanics used to play it. The drumming on this album is nothing short of impressive, being precise, yet speedy, where patterns are frequently switched around to avoid growing stale. There are fills all over the place--crashing cymbals and the like--that inspire one to pick up drums and learn to play. This frantic buffoonery only benefits the huge sound and doesn't get in the way of any other instrument. If the production was different, placing an overemphasis on the drums as many modern metal productions do, then maybe it would have irked me, but that isn't the case here. The percussion is clear and enjoys a fairly balanced sound. The bass playing is also very good--frequently deviating from the guitar--while at the same time being audible. I find that to be refreshing because the bass is usually buried under a mass of distortion commonly called guitar riffs.

If you recall, I was initially turned off by the vocals. Well, it turns out I've grown accustomed to them and have few complaints. They're totally emotional and, while a bit odd for a metal band, suitable for classically-influenced stuff like this. Lyrically, there is some going back and forth between English and Japanese, with the majority being in Japanese, but that personally doesn't bother me as A) they're tough to understand just by listening and B) the music is great. More English lyrics would be like to a cherry on top--totally unnecessary for enjoyment, but an enhancement to the experience, nonetheless.

Variety is this album's specialty. While every song has neoclassical or symphonic influence to some degree (a little or a lot), it's fitted to different arrangements like a custom-tailored suit. "Nah, that's a little too much here. Oh, wait, we need more here." Get my drift? There's the heavily symphonic and classically-influenced "Aristocrat's Symphony" and "Second Fear -Another Descendant-." Then there's total bashers like "To the Chaos Inside," "Zombie," and "Suzerain." On the other side, there are some slower and lighter tracks like "Windress." I find that this keeps things feeling fresh for listeners interested who grow antsy easily.

Let's admit, that while this album is fantastic, it isn't without problems. For me, the obvious downfall was the rerecording of "The Revenant Choir."  Quite frankly, it's inferior to the version Versailles released in 2007 in both sound and power and, when put side-by-side, sounds weak. Nevertheless, it looks like I'll be inserting the version from 2007 in place of this album version.

In addition to that, I found the writing to be a bit quirky at first. For example, the main intro riff at 11 seconds in "Antique in the Future" should have been used more throughout the track. It only returns once, which is a shame because it's so good. The band favor a lighter, clean section in the middle of the song instead. Not what I wanted to hear, but the song writing eventually clicked with me, or I simply got used to it.

This album is sure to stay in my frequent listening pile for quite some time. It's got all the makings of something great, and I'm rabidly looking forward to the Versailles' other material. Noble should be on your short list if you're looking for something different or something layered with all sorts of moving parts. Oh, yeah, and even though all the members of the band dress like women, they're all guys. Figured I'd point that out.