Thoughts on Scar Symmetry's Past Situation and The Unseen Empire 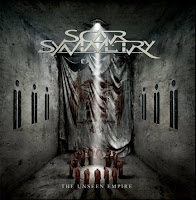 There's no doubt in my mind that my favorite melodic death metal band is Scar Symmetry. The act has always had the right combo of tasty guitar playing and vocal talent to keep nearly any metalhead satisfied. However, once Christian Älvestam (vocals) left the band, my interest began to wane, even if he held virtually no song writing credit. The man is one of the most diverse and talented vocalists in metal, churning out heavenly clean vocals to the lowest of growls. Because of his departure, Scar Symmetry replaced him with two vocalists, one who would assume clean vocal duties; the other harsh. Both are actually very good, but not in the same league.

I still purchased the band's first album without Älvestam. Though the majority of the songs were instantly recognizable as Scar Symmetry, I came away disappointed because I felt the band had incorporated a little too much -core influence with the addition of scattered breakdowns. Suffice to say, without Christian the band wasn't the same. I simply shelved the album and followed his numerous musical projects instead.

Fast forward to 2011, Scar Symmetry released another offering, The Unseen Empire, to ravenous fans. Thankfully, upon my first listen, the album rocks hardcore. Per Nilsson is still a bona fide guitar god (I can't give him all the credit. The rest of the band sounds great, too.). The Unseen Empire is really a return to form, one that will surely keep me interested for a very long time.

I know I don't have a lot to offer postwise, but out of excitement I *had* to write something about Scar Symmetry and this album. Perhaps I will have a recap after I've fully absorbed the record. For now, let's listen to the most accessible song. Even people who claim to hate metal won't be able to turn it down.