One Year Since the Passing of a Legend: Ronnie James Dio 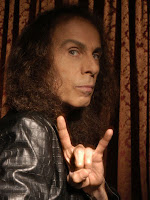 Take a moment to remember the greatest heavy metal vocals to ever walk the Earth. A year ago, today, Ronnie James Dio passed away from stomach cancer. The night of the day of his death I had a bit of a Dio marathon, including all of his work from Elf to his solo project. You name it, it was there.

Dio's passing hit me (and many other metal fans) very hard, especially because he was a primary influence in my musical development--anything from playing an instrument to establishing personal musical taste. Bar none, Dio will continue to be one of the biggest influences on metal music with his work's message living on to be introduced to budding metalheads by their veteran peers.

Often a musician is only universally recognized as great when he or she dies. Take for example Dimebag Darrell or Jimi Hendrix: both excellent musicians, yet not fully "great" until their deaths. Defying all of that, Dio was already special. Even when he was living, he was labeled as the greatest metal vocalist in existence, a status very few musicians can claim to have held.

Let's take this moment to remember Dio through his music.

A metal classic, "Holy Diver" should be used to introduce youngsters to metal until the end of time.


1976 was a sensational year because Rainbow gave us Rising. "Stargazer" is just a mere glimpse at what Dio had to offer us.


After Ozzy was booted from Black Sabbath, Dio took over vocal duties. You might not agree, but that was best thing that ever happened to the band. "Heaven and Hell" is an obvious choice to represent Dio's output with Sabbath, but nearly everything he recorded with them is very good.


Elf were not a metal band. The group shows a different side of Dio, one that more people should be aware of because it is indeed special.


I still get teared up when I think about how Dio is not with us anymore. Luckily, we still have his music to enjoy; music that will continue to inspire musicians for many more years to come.