Initial Blabbering About Uriah Heep's Into the Wild 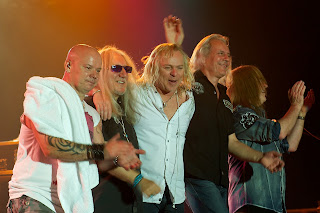 If you didn't know that Uriah Heep recently released an album called Into the Wild, then you better get in the loop. Initially, I found it to be less engaging than Wake the Sleeper (another recent album), but now I'm reconsidering that thought because the album literally just clicked with me today. You know the feeling when you "get" something?

You must be thinking, "Is Uriah Heep really a metal band?" Well, yes and no. The band have undeniably had some metal material and, on top of that, their influence on the genre has been massive. I consider them very relevant to my blog. Uriah Heep are essentially in the same league as bands like Rush, Thin Lizzy, and Deep Purple when it comes to the impact they've had on the genre, and when it comes to classification.

I was recently asked what my favorite song on the new album is. I wasn't exactly sure, then, so I declined to answer; however, with certainty I can now say that it's "Southern Star." Much like the rest of the album, the song clicked with me, and I specifically like the intro guitar riff, as well as the clean section that follows.

I haven't fully formulated my thoughts on the album yet, but I suspect that I will return to it for a blog post. But first I have to get to the other things I've said that exact same thing about. As always, stay tuned.