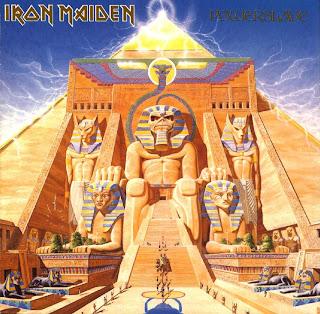 I've decided to do a new series of posts where I'll highlight my favorite metal album from a certain year. Originally, I wanted to do these in chronological order, but, now that I think about it, it really doesn't matter how I go about them. I will only be crowning one album as best from a particular band for these posts, meaning they will be exempt from further winning. For example, Iron Maiden cannot have more than one album win, so I will not be picking another album from a band even if that album is a top pick for a specific year. Trust me, this is a hard choice because Maiden's golden years albums (1980 through 1988) are some of the best metal albums in existence.

Without further adieu, I present Powerslave by Iron Maiden, the holy grail of metal albums. In all honesty, I've never listened to an album as perfect as this one, attesting that it's the only album I would ever give a perfect score of 100%. Its got all the characteristics of an archetypal heavy metal album: plenty of harmonized lead guitar parts (a Maiden trademark), an Egyptian-sounding metal song (various aesthetic influences), excellent artwork, galloping bass lines, hot guitar solos, fantastic instrumental passages, and one of the most recognized metal epics ever, "Rime of the Ancient Mariner."

This might seem a bit cliché because any half-decent heavy metal band can attempt to do something like this, but nobody, and I mean no one, does it like Maiden. The quality is here; the emotion; the crunchy, stampeding riffs; the colossal feeling of epicness; it's just perfect.  Eddie and the boys really put their all into this one. When someone asks, "Hey, what's a good heavy metal album?" this one will be my recommendation every time. With as much passion as I have for Powerslave and influence its had on me, I can't afford not to review it in full sometime.

Runner-Ups and Notable Albums
- Bathory - Bathory
- Celtic Frost - Morbid Tales E.P. and Emperor's Return E.P.
- Deep Purple - Perfect Strangers (While not strictly metal, Deep Purple has been an undeniable influence on the genre, thus it makes this list.)
- Dio - The Last in Line
- Grim Reaper - See You in Hell
- Jag Panzer - Ample Destruction
- Judas Priest - Defenders of the Faith
- Lizzy Borden - Give 'em the Axe E.P.
- Mercyful Fate - Don't Break the Oath
- Metal Church - Metal Church
- Metallica - Ride the Lightning (A decent enough album, but pales in comparison to Kill 'em All and Master of Puppets. I'm including it based on the impact it has had on metal.)
- Omen - Battle Cry
- Queensrÿche - The Warning (My personal favorite 'rÿche album.)
- Ratt - Out of the Cellar (Mainly hard rock, but with obvious metal overtones. Very worthy of being included here.)
- Saint Vitus - Saint Vitus
- Sodom - In the Sign of Evil E.P.
- Trouble - Psalm 9
- W.A.S.P. - W.A.S.P.

I probably forgot something, but this list makes me realize that it was indeed a very fine year for metal.