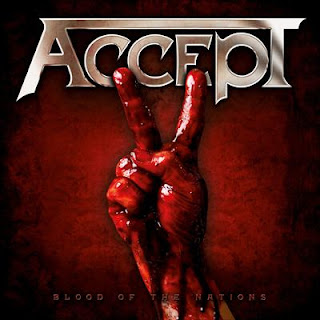 One of the best albums released last year came from German heavy metal band Accept. I've blared it many a time in my car and had sufficient time to form an opinion on it and, with that being said, it might actually be the very best album released in 2010. Because the band was missing singer Udo Dirkschneider, who to my knowledge refused to rejoin, Accept recruited Mark Tornillo, former T.T. Quick vocalist, to take over the job as front man. To be honest, I prefer Accept with Tornillo, as his vocals are much more powerful and convey a better sense of emotion that Udo can only hope to match. Tornillo screeches, screams, yells, hacks and slashes his way to the top, which I suppose is hard to explain, but ends up being better heard. Udo may be regarded as legendary by fans, but he pales in comparison to Mark on technical abilities like range. Remember, this is coming from someone who started listening to Accept with their classic albums like Restless and Wild, Balls to the Wall, Russian Roulette, and Metal Heart. Mark is no joke.

According to my recollection, Blood of the Nations was met with much acclaim, hailed as Accept's return to the metal world. After all, the band released their last album in 1996, so that was, what, 14 years? It was too long, and the support for it was well deserved. The most surprising thing about the album is the production by Andy Sneap, who is known for his work on numerous metal albums today. I would have never expected Sneap to work with Accept; nevertheless, his production is perfect for the band because it gives the songs the power and drive that they need to smash heads and take no prisoners. This ain't your grandma's music.

I won't bore you with descriptions of how each individual instrument sounds, but each link well to the Accept backlog. I wouldn't predict anything less from a veteran band like Accept (Tornillo is a metal veteran as well... T.T. Quick formed in '84). Think of classic Accept on steroids, but way heavier and punchier with rampant double bass on a few songs. When all is said and done, the band prove that the old guys can run with the new guys. I can only hope that the mainstream takes more notice of Blood of the Nations, slotting it with current metal playlists (let's burn the metalcore and deathcore bands first, though!!). It would be fantastic to hear tracks off this album on a local radio station, but that's probably wishful thinking. Oh wait, maybe it isn't. I've played a track or two from this album on my radio show before.

Do yourself a favor and run to your local record store as soon as possible and pick this album up (provided they have it, less than likely). You won't regret it, and you'll be supporting one of the greatest heavy metal bands of all time. I won't hesitate to say that this record truly encompasses what metal is all about.